Discussion From the Platform – Niftymillionaire Tribe, Where You can Connect yourself with Professional Traders and With normal Traders Like you too. What are you waiting for? Get your live Platform Today. Click Here.

#Knowledge: When to sell

Blaming ‚them’ is a psychologically and socially acceptable way to avoid blaming oneself. Yet professionals can, and do, make mistakes. When they buy a stock and it doesn’t go up (even if it doesn’t go down) that’s wrong enough for them, simply because it did not perform as expected.

The pro reasons that the stock went against his judgment, so he sells it. And he doesn’t expect to be perfect, any more than a professional baseball player expects to bat 1.000. Knowing that losses are inevitable, he seeks to minimize them at all times.

To be sure, his ability to take a small loss is enhanced by the benefit of not having to reckon with commission costs, but even so, if he were relatively incompetent he wouldn’t last long in the business; the loss might be less, or slower to pile up, but the return on invested capital would be dismal enough eventually to send him to another field.

We once watched a trader jettison an entire position because it had retreated half a point. ‚Not acting well’ he muttered at the time. But then, an hour later, there it was, roaring not only through his sale price but also through his original purchase price, and going higher still.

The trader didn’t stop to berate himself; he immediately bought the stock again at the higher price. Since Wall Street is a game without end, he saw the situation for what it was: a brand-new chance.

Typically, though, the amateur confronted with the same sort of performance takes the stock’s behavior as a personal affront. Instead of dealing directly with the new information the tape is providing, he will stare disconsolately at the tape (or scowl at the newspaper tables the next morning), inveighing against the ‚they’ who stole his stock from him – and then got rich while he could only watch helplessly.

Obviously, this is not how it is done. An unemotional, consistent program for minimizing losses is the sine qua non of selling efficiently. (The same, as we’ll discuss in more detail later in this chapter, is equally true of selling to capture your profit before a sagging stock takes it away from you.)

Unless one accepts the inevitability of some loss, one is destined to wander in the world of would be, waiting, stock in hand , for tomorrow. Whereas one of the amateur’s most immediate concerns is not to look foolish, the professional’s foremost interest is not to be trapped with widening losses.

He sells to be safe, to be able to keep on playing. To him selling is like taking out insurance on his capital. To be sure, you cannot always be as prompt as a professional who can leap the moment he sees one tick. Nor should you.

You have more important things to do than watch a bunch of numbers all day. You cannot react to that single tick without having seen all that came before, just as you cannot settle for a half point profit.

But adjustments can be made, and once you make them, you’re on the way to developing your own means of reacting to the market through a trader’s eyes.

#Knowledge: Recent 3 incidents which have shaken us & made us rethink where we are moving.

1. Man, who was the owner of Rs 12000 crores empire *Raymonds* is now living in a rented room on hand to mouth basis because his Son has shown him the Exit door.

2. A Billionaire Woman who died in her posh Flat in Mumbai, her body discovered a year later which had become the skeleton in one year and her millionaire son did not even bother to know about her, in the last one year.

3. An IAS level officer committed suicide because he was unable to cope up with the stress of his family issues.

Whatever you have in your life *TODAY*, please be happy with that.

To think… he won 91 GP and was 7 (seven) times world champion. The speed was in his soul but on a day of relaxation in a ski resort, fate intervened and his life changed forever!

To-date, his medical bill is around 14million Euros

wife had to sell his properties to pay the medical expenses.

His tragedy could be a lesson in life for all of us. There is nothing permanent in this “short sojourn on earth”. Why bicker about race and religion when we all end up as skulls and skeletons without a difference!

You need money to survive but you need not be consumed by it.

Do not be unkind to yourself by saying you will enjoy tomorrow as tomorrow may never come.

Do not give excuses to have a good time with family and friends. For in the end, only they matter.

All we have today is “today’s time”. Let’s do good & learn to live a “contented life”!

Have no grudges with anybody,

we just have today…

1- Trades without knowledge
2- Loses money
3- Follows tips without solid risk management (Feeling quick rich)
4- Loses money
5- Gets some knowledge through books and courses
6- Thinks he knows it all & tells everyone how they should trade
7- Loses money
8- Starts realizing he must tune out the noise to avoid following the herd and focus on his own trading
9- Loses a bit less money
10 – Discovers it’s not about the money, but about the discipline to follow a positive expectancy system
11- Almost breakeven
12- Discovers he must work on himself, on his own mindset
13- Everything starts to click
14- Starts making money consistently… 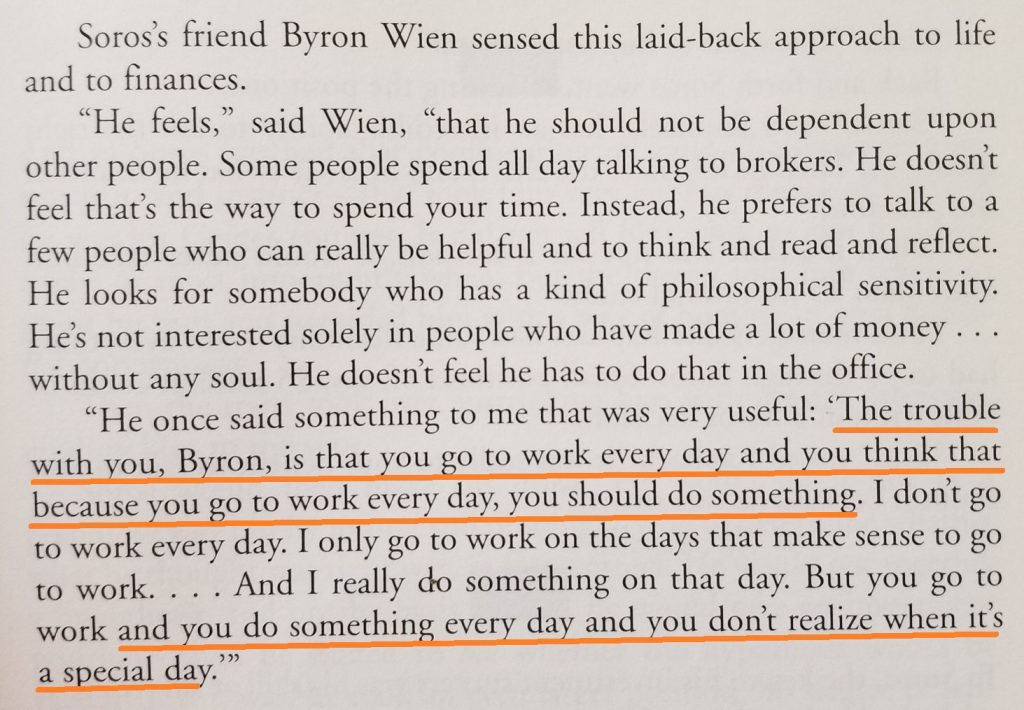